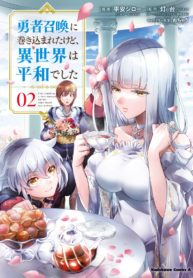 Abruptly showing up in an alternate world, it would appear that I became involved with a Hero Summoning. Also, obviously, I'm not the Hero, but rather it's another person… … and keeping in mind that being exceptionally careful and frightened of the banality of the platitude like turn of events, I was tossed into the whirlwind of war… … or not. The Demon Lord? It was crushed 1,000 years prior. Saint? He's simply the principle entertainer in a celebration. Aristocrats? They're compassionately dealing with us. The Demon Race? They have great associations with Humans. Wars? It's as of now a long time since the final remaining one. Beasts? The Guild and Order of Knight are dealing with them. Get back to Earth? It is at last No-Risk. What I'm arranging subsequent to being up to speed into this? I'm going to appreciate the life in an alternate world however much I need to, go on a social trade and touring, and subsequent to encountering the celebration that is just held once like clockwork… … I will return home securely. The other world was――at Peace. A thoughtful existence where the three races, the Spirit World's Magical Races, the Celestial World's Divine Races, the Human World's Human Races, they are caring neighbors to one another, with everybody carrying on with a serene and satisfying life. In any case, in spite of the fact that I wished to calmly go through a year prior to my return, for reasons unknown, the heavyweights of this world continues to accumulate around me, and… …